Discover the Mystery of the Mangalsutra Wedding Jewelry 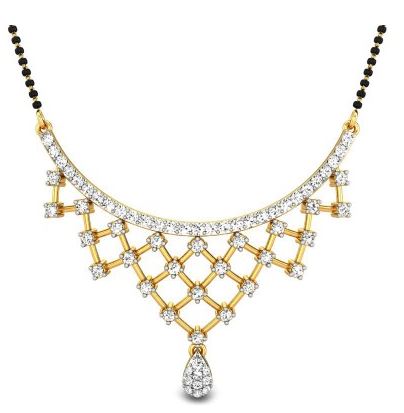 Full of color and wonder, the Hindu culture is very respected in the world. They have many different types of ornaments. Some of these carry special meaning, for example the mangalsutra necklace. Worn by married Hind women, this necklace represents the dedication of a bride to her husband.

In Hindu culture, there are five symbols that indicate that a woman is married. They include;

The mangalsutra
Kumkum
A nose ring
Bangles
A red bindi
Toe rings
Each one of these ornaments is very symbolic. However, the mangalsutra is the most important one. This necklace indicates to the society that the lady has successfully transitioned from a girl to a woman. It also indicates that she is fully capable of running a home. This elevates her position in the eyes of the society around her.

What is its origin?

The mangalsutra necklace is sacred to the Hindu community. Its name comes from the words mangal and sutra. The word mangal means holy and sacred while sutra means a thread. So literally, it can be called a ‘holy thread’. The diamond mangalsutra for women is worn during the lady’s wedding. Her husband puts it on her neck during a special part of the ceremony that is known as the mangalya dhanaram.

Its importance in the community

The mangalsutra is much more than just a necklace. It is a symbol to the community and to the woman who is wearing it. The society is able to recognize her as being married and responsible for a home. Also, the necklace reminds her to be aware of the rules of Dharma.

The rules of Dharma oblige a woman to follow a specific code and accomplish specific duties. She is to stay within her marriage and exhibit good conduct all the time. This is referred to as the code of Righteousness.

It indicates a lifetime bond to the marriage

By wearing the mangalsutra, the woman indicates to the world around her that she is married. As such, the necklace binds her to her marriage. The society around her is able to treat her as a respectable wife. The necklace is also a constant reminder of her dedication to her husband. As such, she cannot engage in immoral behavior outside her marriage. The people around her have respect for the mangalsutra. Thus, they will not engage in unacceptable behavior with the married woman.

It indicates the presence of gods Shiva and Shakti

Goddess Shakti is a female deity who also remains awakened in the woman through the mangalsutra. She is represented by the golden ornament in the necklace. This ornament attracts divine principles and protects a Hindu marriage from all evil.

2 thoughts on “The Mystery of the Mangalsutra Wedding Jewelry”